More Summer Things For You To Know About 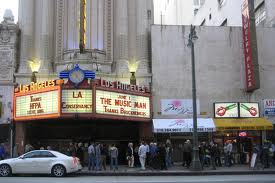 Los Angeles Conservancy volunteers created Last Remaining Seats in 1987 as a way to draw attention to the historic movie palaces of Downtown Los Angeles, many of which were underused and in need of restoration. Little did they know that Last Remaining Seats would become the Conservancy’s signature event, drawing over 10,000 people a year from around the country and the world.

I learned about Last Remaining Seats through one on my husband’s clients in 2011.  Each movie has a special guest or panel to discuss the movie.  I was lucky enough to see Rear Window (1954) and The Music Man (1962) during that summer.  I was hooked.  The old theaters are so beautiful.  I was amazed that I could not find one Angelino who knew about it.

I decided after the very first show to become a member of the Los Angeles Conservancy, buy tickets for each show and share the jewel I had found with my family and new friends.  This is a must for all old movie buffs like myself.

This year’s line-up is getting under way in just over a week and many shows have already sold out.

Hope to see you downtown at the movies!