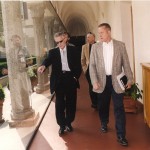 Here we go.  We’re in “The Season” with television’s Emmy™ Awards and the kick-off race for the Oscars™ (tedious, albeit much easier with Outlook, trademark notation required) in full swing.  Entertainment publicists are in hyper drive to secure, cajole, arm-twist, bargain, “you owe me”, and, more often, honestly present their clients’ estimable professional accomplishments for peer recognition.  It’s a tough, nasty, inspiring, and truly thrilling profession.  And one of the most secretive careers—Ever.  (Hyperbole is seldom frowned upon in PR.)

For those unfamiliar with publicists, we’re the people at every Red Carpet Event (hyperbole point, again) behind every self-anointed Celebrity: usually on a cell phone, sweating and wearing an ill-fitting black outfit while furiously chewing gum.

Historically, publicists have been the Shakespearean-like messengers lurking in the shadows surreptitiously passing valuable information between parties with varying success. Didn’t work so well with Romeo and Juliet, but the donkeys took the fall. In more modern parlance, we’ve been referred to as “shills,” “flacks,” “handlers,” “fluffers,” “schlock meisters,” the denegration goes on.  Tell me the last time you saw “Publicist” listed on a network TV credit scroll.  Only recently have more enlightened productions noted the contributions of the publicist along with “Hand Double,” “Body in Pool Double” and “Animal Transporter” credits.

OK, I jest (sorta).  There are wondrous moments in the life of publicists—or at least mine.  After winning one of her many Daytime Emmy™ (Argh!, the trademark thingy again…)Awards, I escorted Oprah Winfrey and her other BFF Steadman, to the waiting media.  It was the year she wore that strapless, plum, off-the-rack Armani gown (details provided by—wait for it—a publicist!).  As we entered the glamorous freight elevator at the Marriott Marquis Hotel, I said, “You look fierce!”  Oprah burst out laughing, and Steadman concurred, “Doesn’t she?”

In the early years of LA’s Project Angel Food, an organization that provides hot meals for home-bound clients with chronic illnesses, we organized a Media Day and invited the press and supportive celebrities to the small kitchen housed on the second floor of a West Hollywood church.  Shirley MacLaine looked me straight in the eyes (an unnerving experience on its own) and probed, “What do you want me to say?”  She nailed the notes I asked her to convey to the room full of press, and then took things one step further.  “I want to deliver a meal to a client and have the crews follow me.  There’s no reason to be afraid of people with AIDS.  OK with you?”  The footage made all the evening news broadcasts.

Playboy founder Hugh Hefner is a publicist’s dream.  He will politely answer any question from any reporter.  There are few individuals who have influenced journalism and reporting as profoundly as he.  It was always a pleasure to listen as he described his fabled life for the 2,739th time with the same enthusiasm as the first.

And then there’s Saint Elizabeth.  I had the life-altering experience of working with Chen Sam, Elizabeth Taylor’s long-time publicist and dear friend, at the beginning of the AIDS pandemic. It was at first maddening, and then wondrous, the way Elizabeth and Chen worked the press.   They both knew that if Elizabeth made an appearance, the press would show up.  Elizabeth showed up when she was ready, and the press waited for her every move.  We called it “EST,” Elizabeth Standard Time.  I walked Elizabeth to the podium at one press conference (an hour behind schedule), and the blinding lights from the video cameras and popping photographers was like viewing the birth of the solar system.  Elizabeth, along with Rock Hudson’s courageous honesty (guided by publicist, Dale Olson) and Army Archerd’s professional reporting, forever altered the way the world viewed this sinister, emerging disease.

So, call me what you want.  In this new age of immediate access to millions through social media — truth and accuracy be damned — I’ll proudly raise my hand should someone call out, “Is there a PR guy in the room who will handle this cluster $*&# of a press conference?!?”  Good help is hard to find.