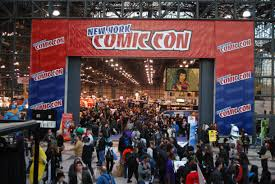 Last week, I was at Comic Con. Wait! I thought Comic Con takes place in July? Well, the one in San Diego does. But for the past few years, the East Coast has brought some of that fan love to the Big Apple, at the Javits Convention Center to be exact. And you know what? It’s WAY more fun than the original West Coast template. Heresy you say? Blasphemy you accuse? Sacrilege you declare? Read on. The reasons for my thesis might surprise…

There, I said it. Let the hate email commence. But having both attended and worked the NY and SD shows, I find the East Coast fans to be not only more appreciative of the attention from the NYCC exhibitors and panelists, but frankly a lot more polite. That last word is not a typo; NYCC fans actually have manners. There I would be in my client’s booth, presiding over a plethora of swag, including buttons, posters, bags, maybe even a plastic brain or hand. In both shows, you have the attendee look-e-loos, curious about what’s offered, but not yet ready to commit. Then there are those are flat out not interested. Both coasts have a few of those deniers as well. It’s when they decide to act that separates Left Coast from Right Coast. In NY, fans would usually – and sometimes sheepishly – ask if they can partake of the freebies. “Can…can I take one?” would be the standard refrain. I can’t tell you the look of joy when we overshot expectations by saying all the displayed items are for attendee consumption. In SD, I’ve seen attendees clean out button bowls and poster tables, only to then look me in the eye and interrogate me with “Is this all you have? Don’t you have anything good?” And when  you do have something exceptionally good, a SDCC mob is something you don’t want headed towards you. One year, we had to restrict the doling out of WALKING DEAD bags to a few appointment times during the day. As the anointed hour approached, crowds would slowly form. At first seemingly benign, they patiently waited for the moment when the distribution commenced. What’s that line from the reporter who covered the Hindenburg disaster? “Oh, the humanity! Oh, the humanity!” Like something out of the AMC series itself, I found myself surrounded by a sea of floating, thrusting hands. They were no longer attached to human beings. Adult hands; children’s hands; adolescent hands. All pointing towards me and my stash of $1/unit branded bags that most likely had a life expectancy of two weeks before the seams dissolve. I’ve seen adults snatch bags out of children’s hands at SD. Guess Darwin was right. In NY – at least so far – I haven’t seen such vulgar displays of swag entitlement.

I attended my first SDCC in 2006. Culture shock doesn’t begin to describe what I witnessed and felt at that first exposure to the pop culture zoo. But for many of the old-timers, the tipping point for SDCC had already occurred: What was once a modest gathering for comic books fans had now become the plaything of the entertainment conglomerates. In the last couple of years, even SDCC organizers have acknowledged this transition, with their marketing materials and public banners now touting: “SDCC – Celebrating the Popular Arts!” Another way of saying: “All major entertainment labels welcome, no matter what you’re promoting.” But for those who remember when superheroes first started in pulp magazines, NY still honors that history. (Makes sense; NYC does a much better job of keeping the old than SoCal, where anything over 15 years old is designated a historic landmark.) True, while NYCC has plenty of pop culture to go around (Universal held a Chucky panel and I attended a Warner Archive screening of The Beast with Five Fingers), the exhibitors were by and large cognizant of the fact that NYCC has the word “Comic” in the show title. However, as the attendance numbers of NYCC continue to grow (I heard 116K for this year, which is in striking distance of SDCC’s yearly 130K fan capacity), the show might attract bigger labels with bigger projects to promote. Hopefully, NYCC will find a way to juggle both without losing sight of its original intention.

Perhaps the most subjective of my reasons, there’s nothing like spending the night in New York City after a long day’s journey into Comic Con. True, the Gaslamp District has geography going for it, as it’s a little over a mile square and right across the street from the Convention Center. However, with that convenience comes competition. Fierce competition. Competition for restaurant seating, sidewalk access and even accessibility to certain foods. I always joke about how many pounds of hamburgers, hot dogs and chicken tenders are consumed during the average SDCC. As a sidebar, when it comes to convention grub, the Javits wins by a landslide. There’s an entire food court floor under the Javits, with the Greek place selling gyros that would compare with anything bought in Manhattan proper – or even Chicago. I also have a favorite Philly cheesesteak kiosk on the Javits floor that I would make sure to frequent whenever I’m there. But to have Manhattan at your fingertips when the show closes at 7pm ET – all the restaurants (both expensive and economical), the sheer variety of cuisines, all the theaters (both legit and cinema) – truly there is NO comparison. And when entertaining media, it’s a lot more impressive to chat about press matters over a steak at Gallagher’s than chicken fries at the Gaslamp Jack in the Box.

You’d think SDCC would have it over NYCC when it comes to weather. For decades, weather has been the reason for countless East Coasters to trek West. After all, what could be more idyllic, weather-wise, than coastal San Diego in the middle of July? Of the five SDCC’s I’ve worked, only one had weather that would be considered even tolerable. San Diego, for whatever reason, is prone to humidity and high temperatures during the mid-summer – almost like New York which is fine, if you’re there to sunbathe or enjoy the Pacific Ocean shoreline. But when I’m there in full costume – as a harried publicist chasing down talent or interviews – running around in 95⁰F heat with humidity to match is not exactly energizing. But New York in mid-October is the environmental backdrop of romantic comedies worthy of Woody Allen or Nora Ephron. Temperatures barely dip below 50⁰F, and rarely soar above 75⁰F. This year, it was blustery for the first couple of days, and rained slightly on preview Thursday. By Friday, the clouds started to clear, and on Saturday, it was windy, clear and cool. Perfect weather to dress up as Superman, Bilbo Baggins…or a slightly-less stressed PR flak.

I’m sure there a couple more reasons, but frankly I’ve dissed SDCC enough. I’m starting to sound like one of those whiners about the superiority of East Coast anything to SoCal. You know the ones where “us” Left Coasters counter the rant with “If you love it there so much, why don’t you move there?” Let me state unequivocally that I love SoCal. It still has the edge in so many ways. And when the day comes that NYCC becomes a bigger receptacle of marketing dollars, then my appreciation of that show will become yet another sad memory of what once was, but is no more.