Why I Love Horror Fans 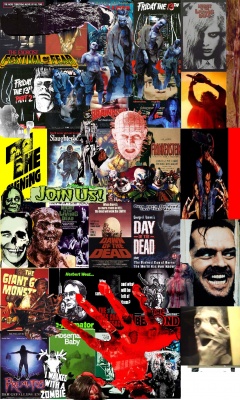 There are many reasons I love horror fans. At the most purely practical level, they are the audience for which I was hired to interact with when I joined SPPR eight years ago. It is their dedication to horror cinema – and especially horror DVDs, VODs and Blu-rays – that have directly benefited me, i.e. a steady paycheck since 2005. But that’s the cynical eye view of this relationship. Yes, I have made my living by reaching out to horror fans, but over the years I’ve grown to admire them, appreciate them, and yes, even love them.

For one thing, they’re not afraid to embrace the weird or the strange. Maybe because those exact words are not alien to their life experiences or vocabulary.  But at the same time, they can embrace something that outwardly may seem nothing more than exploitation, but contains within it messages of social and political critique worthy of Swift, Voltaire and Rabelais. Consider the recent success of THE PURGE. A low-budget dystopian horror film about a future America where its citizens can commit all manner of atrocities without reprisal for one night a year – and one family’s survival of this government-sanctioned Kristallnacht – THE PURGE was a huge box office hit its opening weekend, making almost ten times its original budget. The thing is, THE PURGE is not just another home invasion shocker. Within it are digs at our current State of the Union so potently critical, I’m really surprised conservative bloggers haven’t declared the film out-and-out treason. Concepts like THE PURGE as a cover for institutional genocide of the poor and homeless (since they are easiest to hunt and out in the open) or that whenever someone is about to kill during the assigned 12 hour period, they invoke a prayer to the “New United States.” High-voltage stuff for something that’s lumped together with the likes of Freddy vs. Jason and The Devil’s Rain.

The second time I’ve seen the power of the horror fan was when I attended the premiere of HATCHET III. The brainchild of Adam Green, HATCHET III is the “concluding” (we’ll see; you can never keep a good horror icon down for long) installment in the trilogy created by Green about the legend of Bayou boomeister Victor Crowley, played with increasing sophistication (really) in each chapter by another horror cinema icon, Kane Hodder. I had the good fortune of helping launch the franchise in 2007, and have bumped into Adam in varying degrees of professional responsibilities with the 2010 release of HATCHET II and this year’s HATCHET III opening. Adam is a horror film fan who became a filmmaker. Around the same time, a website called DreadCentral was launching. Steve “Uncle Creepy” Barton, the Editor and guiding guru, was a horror film fan who became a leading genre reporter. In 2007, I witnessed the convergence of these two great forces to see first-hand how the fan became more than a spectator.

At the premiere, in his remarks to the audience before the screening, Adam thanked the fans who have been with him on the six -year journey to bring the HATCHET trilogy to screens both silver and flat. He also made it a point to talk about how we wanted to make sure that screening – which are usually reserved to the last seat for industry folk and friends – would also include the very admission- and DVD-paying crowd who turned Victor Crowley from a summer camp boogeyman invented by an eight-year-old Green into a fully produced and theatrically released triumvirate of prosthetic terrors. And the M.C. who introduced Adam Green? None other than Uncle Creepy.

So to horror fans everywhere – thanks for the support, thanks for your friendship and keep fighting the good fight.