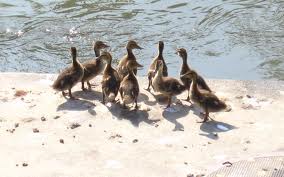 SPPR, Inc. moved to its new work space almost a year and a half ago.  One of the first things I noticed about our building was that it was painted a bright yellow.  This, in itself, was exceptional.  But another thing of note was that we were located by a creek.  It was girdled by concrete, true, but it was a creek all the same.  The sign close by even confirmed the fact:  Ballona Creek.

I walk by it every working day.  In the autumn and winter, the rain makes it thrilling and torrential.  In spring, it relaxes into a mild, green current.  In summer, well, sediment is pretty too.

One day, months and months ago, I was walking to work and approaching the bridge that spans over the creek.  I always look into the creek.  But this time I noticed that someone else was doing the same thing.  And something must have grabbed his attention because he had paused:  he was watching something.

Now, I don’t know why I spoke to him:  perhaps it was, as I recall, a Friday – and I was more likely to approach a fellow creature in a rare fit of celebration and friendliness. Anyway, I asked what was of such gripping interest.  He pointed towards the creek.   There were four female mallard ducks waddling in the shallows towards – as far as I could make out – the underpass of the 405 freeway.

We happily watched their progress for some time before I had to continue my walk to work.

What were they doing there?  How did they get there?  What were their plans for the day?  Were they on a lady-ducks’ day out?  Perhaps on their way to meeting some friends for lunch on the banks of Ballona Creek?

Whatever their plans were, it must have pleased them, because even now I swear that I heard them softly, contentedly, quacking to each other.