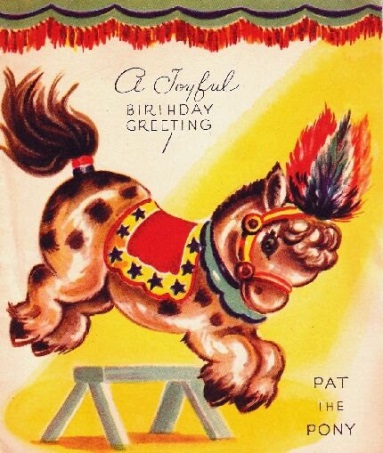 Once, when I was working in advertising (and there was no resemblance to Mad Men, unfortunately, save for the stray vodka bottle left in the conference room) I was placed in charge of putting together a birthday party. Well, perhaps ‘party’ is too strong a word – ‘brief recognition of birth’ would be more accurate. As I was given this assignment at the last moment, and only had the downstairs snack bar as a party source, I had no appreciable aspirations.

I came back with some gummy bears and pretzels.

The feedback was so hostile that party rules were immediately established. Rules about money donations. Rules about responsibilities. Rules about NO GUMMY BEARS and NO PRETZELS. Parties after that were more celebratory in look and sound, but they were also more workmanlike. When it was your turn to put together a party, you couldn’t help but be resentful.

My birthday was June 6, and while I didn’t get a pony – which I have asked for repeatedly, it was duly recognized here at SPPR with suitable pomp and satisfaction.

A song. A card. A collection of adorable cupcakes – without a strictly enforced ‘pass the hat’ policy – made for a birthday at work that was beguiling and memorable (though notably pony-less). It is not part of the job, it isn’t a chore, it is a boutique celebration suitable for a boutique agency. Much preferable to the party-responsibility passed from one employee to the next with almost vehicular efficiency.

And who knows; maybe I’ll get a pony next year.