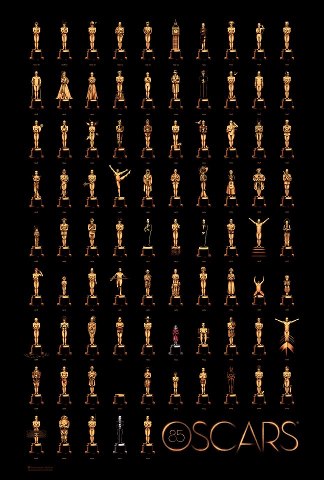 I miss having the Oscar ceremony take place on Mondays. For most of the world, having a late night Oscarcast on a school night meant staying up to all hours to find out who gets the entertainment industry’s brass ring: the Academy Award for Best Picture. But for those of us living in Hollyweird, Oscar Monday pretty much meant a holiday. The only difference between Oscar Monday and, say, the July 4th holiday or Labor Day, was that you could still make a bank deposit at a human teller and bills could still be delivered to your mailbox. But just about everything else in LA would take a breather that day. And why not? If Hollywood is ready to throw the world’s largest “let’s-give-ourselves-a-pat-on-the-back” party, why shouldn’t the city housing the industry concurrently take a 24 hour time-out?

Anyway, the Oscars are upon us this weekend and this year, there really is much to celebrate. Whereas in previous years – before the Academy decided to water down the criteria by expanding the number of Best Picture nominees allowed – the indies dominated the Oscars and the major studio selections were mostly relegated to technical categories. This year, however, the major studios did the unthinkable: releasing films that were both critical AND commercial successes. Once upon a time, back when Hollywood was a series of dream factories dotting the Southern California landscape, studio moguls aspired to make films that would appeal to both audiences and the critics. There were referred to as “prestige” pictures, and there was a concerted effort that when the right mix of content, talent and execution came together, the studios would actually want people to know they were responsible. That was when the studios answered to no one but the fans. Now, owned under corporate umbrellas and shareholder expectations, bottom lines must be protected at any and all costs. Prestige fare gave way to predictable income, and for almost the past 20 years, we’ve had studios who would rather greenlight a $300M feature film version of F TROOP than a cutting edge original screenplay about a serious societal issue. And for awhile, superhero cinema seemed the safest way to at least make some attempt to guarantee butts in seats while peripherally attempting any kind of cultural introspection.

But 2012 was different. Of the 9 Best Picture Nominees, five are from the majors – ARGO, LINCOLN, LIFE OF PI, LES MISERABLES and ZERO DARK THIRTY, with two from major mini-major Weinstein (DJANGO UNCHAINED and SILVER LININGS PLAYBOOK). While none of the successes are in the vein of THE AVENGERS, none are outright financial disasters. So perhaps the cinematic gulf between prestige and popcorn may be closing. I guess we’ll find out Sunday evening.

In the meantime, another Oscar tradition is armchair guessing the winners. So, with absolutely nothing to go but pure hunch, here are my predictions for the major categories of the 85th Academy Awards. Oh, and here’s hoping Melissa McCarthy is one of the presenters. She’s heir apparent to the great comediennes of the silver screen.

If you want to do some of your own armchair predicting, check out this great link we found.